Our documentation site is evolving — here are six great improvements

It’s been a couple of months since we released our new documentation site. We said it was a work in progress, and you might have noticed that it is. Since a lot of changes and additions have been made to the site since its release, we figured it was about time we gave you an update on what’s new. These are no giant leaps for mankind, but big steps in the process of improving usability and content.

The hosting industry moves fast and leaves no prisoners behind. We work hard to make sure that our customers, a great mix of hosting companies and telcos, can continue to offer cutting-edge hosting services to their end users. As you may know, we recently released Atomia 16.9, a brand new version of our hosting and billing software with powerful new features and improvements.

We just wanted to let you know that we have now updated Atomia.cloud to reflect some of the cool new cloud-related features in Atomia 16.9, and in the process completely updated the site’s design language to match the rest of Atomia.com.

We are happy to announce the launch of our new documentation site, learn.atomia.com. Here we have collected all of our documentation in one neat package, and in the process made some significant changes to how it’s presented and organized. Read on to learn what’s new, and what’s coming!

We have a lot to tell you about, so let’s get right to it!

We’d like to welcome a new hosting company to the Atomia family. Tu CPD Virtual (which translates to Your Virtual Data Center in English) launched a couple of weeks ago in Spain, and we’re very happy to have them on board. Congratulations on launching!

Tu CPD Virtual offers pay-as-you-go VPS hosting using Atomia’s hosting and billing software. Here is how they describe themselves and their approach to the market.

As you may know if you’ve followed us for a while, we have two major releases of our hosting and billing software per year. In September it’s time for the second big one of 2016, which will open up even more possibilities for hosting providers.

This is a quick sneak peek of some of the new features and improvements that are coming in our next release.

The Atomia logo has remained unchanged since our start in 2009, but the product as well as our company has seen a lot of changes since then. Some tweaks were in order. 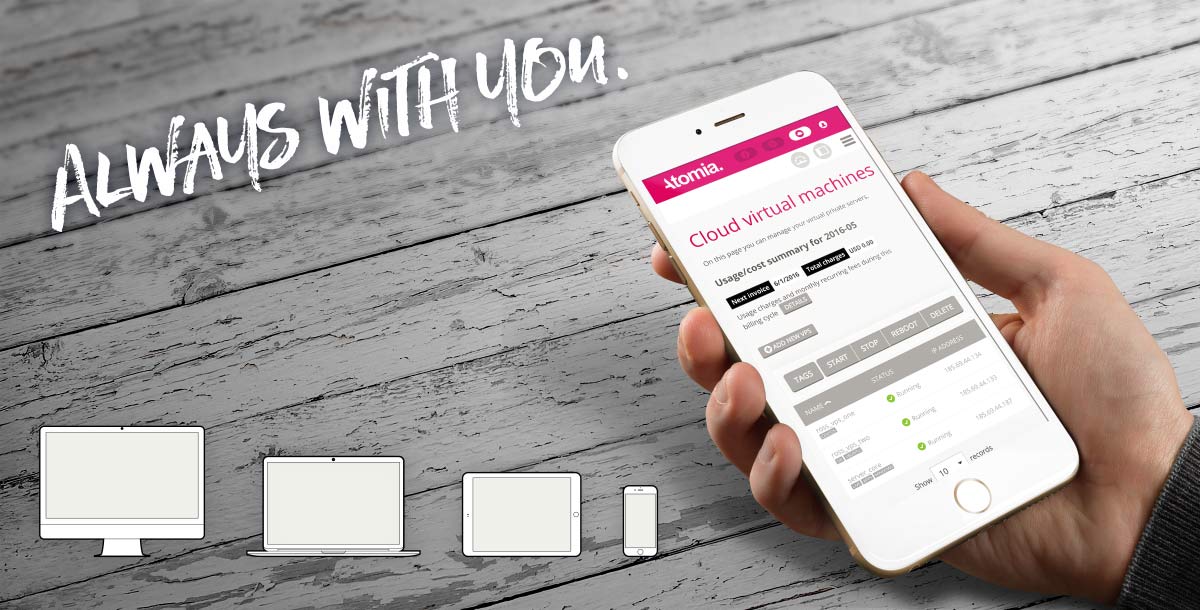 Hosting control panels can no longer ignore the mobile web

Today more than 40 percent of web access is done via mobile devices, and this is a growing trend. It shouldn’t come as a surprise. Just think about how often you yourself access the web on your mobile device — and you’re hardly alone. There were 2.6 billion smartphone subscriptions worldwide in 2015, and by now you can add a couple of hundred million to that number.

With internet access everywhere and a smartphone in every hand, being able to work on the go has not just become a possibility, it has become a requirement.

OpenStack Mitaka arrived last week, the 13th release of the increasingly popular open source software for creating private and public clouds. Atomia uses OpenStack for our various cloud hosting features, such as VPS hosting, cloud storage, and what we call virtual data centers (where our customers can sell OpenStack tenants). That, and our billing system’s OpenStack integration is second to none.

We are proud to announce that as of today, version 16.3 of the Atomia cloud hosting platform is publicly available. Using Atomia as your hosting software has never been a better choice.

This is the first of this year’s two major releases, and includes a ton of improvements and useful new features.