Geographical coverage at a glance

One of the big benefits of using a large public cloud provider is that you gain access to their global infrastructure and can easily create virtual servers in places close to your audience (or close to yourself). These three providers all have multiple data centers spread across the world, but as you will see below, they are not all equal in terms of coverage. Far from it.

For your viewing pleasure, we’ve put together an all-in-one map showing the various locations currently available from AWS, Azure and Google Cloud.

Our only criterion for a location being included was that it supports virtual servers (Amazon EC2, Google Compute Engine, Azure Virtual Machines). CDN networks and other “edge locations” were not included.

The differences become even clearer if we make a chart comparing the three by geographical region: 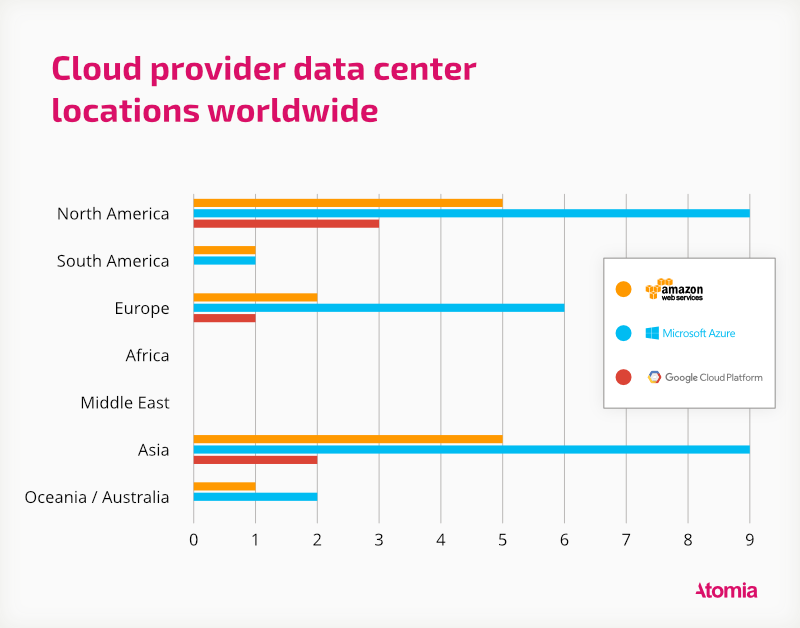 Or, summing everything up: 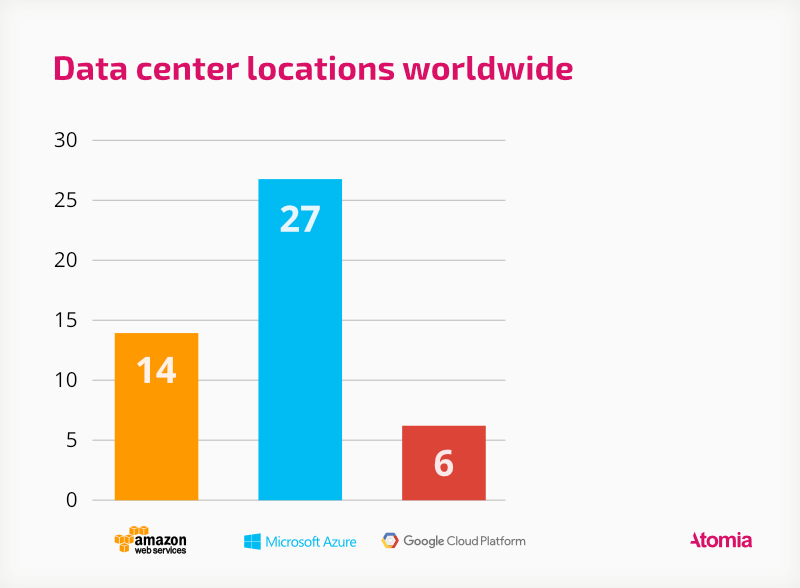 If this were a competition, the winner would be pretty clear.

All three providers are continually adding new locations, and they tend to preannounce what’s coming up. Here is the current plan from each company:

Considering how much the market is growing, expanding makes total sense. We mentioned in a previous article that we are entering a golden age of cloud hosting, and this is just another sign of where things are heading.

These giants competing against each other (and many others) is a good thing for consumers of cloud services. Prices, features, geographical coverage; they are all bound to improve faster this way.

We don’t want to give you the impression that these three cloud providers are your only options. There is a significant number of them out there, but for the purpose of this survey we focused on these three. They are often discussed in conjunction with each other so it made sense to compare them, and information about them is readily available.

As you already know, our focus was on tallying up the number of different geographical locations currently available for each service. Often there will be two or more data centers for a location. The companies use slightly different terminology, but thankfully all three have maps with their current and upcoming data center locations marked out, so this is what we used as a data source (see the bottom of this article).

There is of course more to choosing a cloud provider than simply looking at how many data center locations they have. There are other criteria such as pricing, features, ease of use and how well they fit your own specific needs and preferences.

That said, it’s always good to be informed, and we hope you found this survey both useful and interesting.

P.S. If you have any questions related to this article, please feel free to email peter -at- atomia -dot- com.